[This was originally written years ago for a Christian campus publication, Revisions. It is one of my favorite reflections and will appear on the ESN blog tomorrow.]

St. Francis and the Leper

The patient came in for a refill of pain medications even though it was his first visit to the family medicine practice. The front desk staff had a letter for the supervising resident from the patient’s previous doctor, which the resident read out loud to me: “Due to difficulties in our doctor-patient relationship, we regret to inform you that we can no longer serve as your primary care physician office.”

The resident’s eyes widened with recognition. “Ah! I’ve heard about him. They said that this doc was a saint for seeing him for so long, something about him being non-compliant and all that.”

It was my job as the medical student to figure out the rest of the story. His name was Mr. Thompson* and he had a dizzying array of pathologies. He was friendly and talkative throughout the interview, but I harbored a deep mistrust for him beneath my own pleasant and cordial exterior. I had been charmed and lied to before.

His chief complaint was not, in fact, a need for pain medications. It was a set of extensive and painful leg ulcers, which remained hidden underneath his pant legs. As he rolled up his clothing to reveal the layers of bandages covering both calves, a nauseating stench filled the small room. My eyes began to water and I wondered if it smelled of gangrene. Then I wondered if it would linger on my clothes.

According to Mr. Thompson, visiting nurses typically changed the dressings once a week, but recently they began telling him his legs smelled particularly bad and that the doctors should take a look. The resident came in and we began preparing for the procedure. Mr. Thompson continued to talk about his legs casually as if he were speaking of the weather. They swelled occasionally and leaked fluid, especially when he didn’t take his meds. The arthritis in his knees and ankles was worst when he sat, but he would stay seated for us. There was a large ulcer on the left side of the right leg to be careful of. He would yell to let me know if it hurt.

The worst part of the process had been removing his socks, which he admitted he couldn’t change often because of his inability to reach down and touch his toes. He usually just threw them away, so we did likewise. I knelt at his feet and, with gloved hands and a large pair of scissors, slowly snipped away at the old dressing. It was stuck to the skin, and as I it peeled away, diseased and dead tissue flaked off with the gauze. What remained was a mottle of purple and red hues, a blotchy landscape of crusted inflammation stretching from the knees to the tip of his scaly toes.

Mr. Thompson eyed the resident working alongside me and said, “You’re scaring me.”

“What?” the resident replied.

“That look on your face… you look scared – surprised.”

“Well, this has got to be one of the worst cases of this I have ever seen.”

The thought entered my mind that these two legs should be amputated. The patient told us earlier that a vascular surgeon had suggested something similar, but that “so long as he could stand it”, frequent dressing changes could keep the infections at bay a little longer. The patient desperately wanted to keep his legs. He was content to amble around in spite of the pain and intensive wound care. He knew that time was not on his side, but he wanted all the time he could get. He was only in his forties.

But still, the thought lingered in my mind: these legs should be amputated. And it wasn’t because I thought it would make his life better. It was because it would make things easier for us: the visiting nurses, the vascular surgeon, the doctors, myself. I wanted those amputations to make things easier for everyone. I wanted to sacrifice those legs to lessen the overall burden of suffering in this world.

In medical school, we are taught to strive to be “humanistic”. We have an honor society dedicated to humanism in medicine, but we are never told exactly what it means. Humanism, as a worldview and a philosophy, believes in the maximization of human capability and possibility. Humanistic medicine believes that, by minimizing suffering, medicine and its practitioners enable others to reach a fuller potential. But this assumes that we are willing to engage in compassion itself – a word that means, “to suffer with”. The paradox of compassion is that its very definition calls us to take up the thing we wish to alleviate, to bear what we find intolerable in others. But what force can compel us to engage the very things we despise? In such a daily grind, should we be surprised that we think such profoundly disturbing and cynical thoughts as amputation for convenience sake?

As I gingerly picked at the remaining gauze, a story about St. Francis of Assisi came to mind. He came across a leper on the road one day and embraced the man, kissing him full on his rotting lips. St. Francis described it this way: “This […] is what I understood: all lepers, cripples, sinners, if you kiss them on the mouth — they all become Christ.”**

In that moment, I imagined that the diseased and scabbed feet I held were the feet of Christ. I thought about what it would be like to wash them and kiss them like the woman with her perfume and hair. I looked up at this man sitting before me, his face attentive and appreciative of the care we were giving. I looked up at the man before me and thought about all the factors that repulsed me from him: the rumors of drug abuse and non-compliance, the side-long glances between providers, the stereotypes I harbored, the ugly nature of the pathology itself. As I thought about all this, shame and love swelled inside me as my head swam among the putrid odors and silence. It made everything disorienting and holy, and I found myself deeply disturbed within my heart.

But in Christ, a transformation occurs that changes the both of us into more familiar and beloved forms. In Christ, the man of sorrows who took up our infirmities and iniquities and is now seated at the right hand of the throne of God, the object of our affection became deformed, and so now all deformity can become divinity. In Christ, we no longer see the futility of the flesh but the sanctity of the soul, and our hope is regenerated and renewed.

After all, it is by His wounds that we are healed.

When I survey the wondrous cross
on which the Prince of Glory died;
my richest gain I count but loss,
and pour contempt on all my pride.

Forbid it, Lord, that I should boast,
save in the death of Christ, my God;
all the vain things that charm me most,
I sacrifice them to his blood.

See, from his head, his hands, his feet,
sorrow and love flow mingled down.
Did e’er such love and sorrow meet,
or thorns compose so rich a crown.

Were the whole realm of nature mine,
that were an offering far too small;
love so amazing, so divine,
demands my soul, my life, my all. 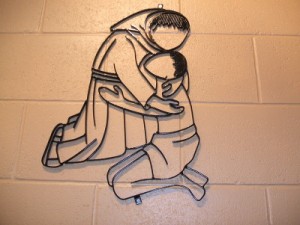 I wish I had this on my wall.