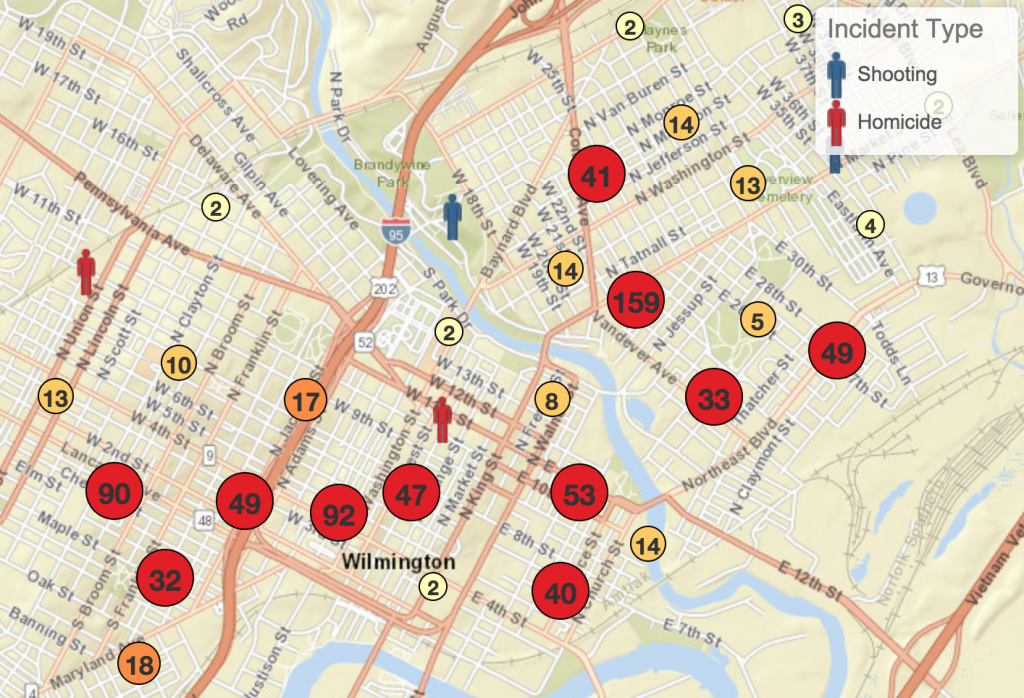 Wilmington shooting map as per 6−2−18 since beginning of record keeping in 2011 by the News Journal.

This post has been dormant since March 29, 2016, but its title and its content have persistently been on my mind since. The other day at some social gathering someone asked me what my hobbies were and, after thinking for a moment, said that it was studying firearm violence. They laughed awkwardly and so did I, but my wife didn’t because she has shared enough of life with me to know exactly why it had become such a central preoccupation.

This is what I had left partially written two years ago:

Would you live in a place where people have been shot? Stabbed? Raped? Murdered? Why not?

Are these idiotic questions?

I have been participating in more and more community forums discussing “urban problems.” Not the sort of things like traffic snarls, bike lanes, or charter schools, but more of things like housing insecurity, community policing, and juvenile delinquency. We drove by our old neighborhood the other day and were shocked to see how much it had already changed in the year after our departure. The church on the corner that also acted as a major food pantry has since burned to the ground. Kids don’t play on the streets as much even in daylight. And, perhaps most telling, my neighbor’s windows have been shot out by bullet holes.

In these forums filled with energetic and dynamic people who want to change things, the word “poverty” triggers all sorts of speculations as to root causes and what needs to be done to reverse them. I have rambled about many things here in this blog: slumlords and exorbitant rent prices, sex offenders, mass incarceration, endemic unemployment, drug trafficking, healthcare inequity. Others can add a litany of other tragedies to the list: public education failures, food insecurity, police brutality.

But I keep returning to one thing: violence.

There is a reason for that. For one, violence begets violence. There are increasing volumes of research that indicate one of most significant risk factors for a person committing a violent crime is that he or she was previously exposed to or a victim of violence. Dr. Gary Slutkin has even pioneered programs in Chicago that treat violence like a contagious disease.

But really, the reason is simpler than that in a lot of ways.

During those years when I lived in a neighborhood affected by gun violence, that reason was self-evident every time a friend or colleague from outside the neighborhood asked how I was doing. The question was never, “Hey how is the heat doing in the winter? I hear you pay rent to a slumlord,” or “Are your neighbors worried about not being able to get a job because of an incarceration record?” or “Have rates of smoking and asthma decreased on your block?” It was always the same joke: “Have you been shot yet?”

Since then, the evidence has only grown to support the hypothesis that violence is a unique desolation that by itself induces a chilling effect on a neighborhood. Last year, this study by the Urban Institute noted:

Since beginning to write this post two years ago, roughly 170 more people have been shot in our small city with the vast majority of events clustered within three zip codes. Though the past six months saw a significant reduction in the number of incidents, the past week has been particularly brutal with five victims and the latest one a homicide. That last death was a 16 year old gunned down about four blocks away from where we used to live.

The only time I get to sift through the research literature, the newspaper, and the city crime reports is late at night when everyone else has gone to sleep. It means that even though the nightmares have become less frequent, I occasionally dream about the things I’ve read, the people I have known, the friends and patients I fear will die. I have bad dreams about what it would be like to be shot. Even so, I do so from a position of relative safety in which MLK Jr’s “fierce urgency of now” can still be lost on me. I still view my pace and tone as on par with slacktivist posts on Facebook and an almost casual interest in the subject matter. But what I am waking up to is that this is a public health crisis of terrifying proportion that may be made worse by mediocre effort. I aim to navigate this blog in a way that diligently pursues and processes the reduction of firearm violence with the best of analytics and research available. I owe at least that much to my neighbors.